Christmas morning is something I look forward to almost all year long. Especially now that I have children. There’s just something so magical about waking up on Christmas, the rush of excitement over opening presents. I have so many memories of running into our living room to see what Santa had brought me. Tearing into wrapping paper and tossing bows and ribbon aside. Thank you to our friends at Mattel for providing toys in exchange for our honest review.

And now that I have a five year old and a newborn, Christmas has really taken on an extra special kind of joy. While the baby is truly like our little Christmas gift, the real magic of the season is in watching our five year old celebrate the month of December.

Five is super heroes. And slime. And robots, race cars, anything with wheels really. Five still believes in Santa Claus but is starting to wonder how it all works. Five knows the Santa at the mall isn’t really Santa but still believes there’s a magical place where elves pack up a sleigh and set-off with reindeer to help the real big guy get the job done. Five is something special!

Five loves to battle. Five spends hours imagining which super hero would win in a one-on-one fight. Batman versus Superman. Superman versus Spiderman. Spiderman versus Ironman… and on and on! Five can talk for hours about the strengths and weaknesses of imaginary characters. His big imagination dwells on the smallest of details and needs answers. “But what if….” is a constant query.

Five loves to construct. Five creates tall towers and buildings with secret trap doors and hidden hallways. Five imagines the impossible and seeks to bring it to life. Five does not accept the rules of the world and seeks to break them with purpose. Five races with the wind.

Five is fearless. Five believes he can do things he’s never tried before. All by himself. Five doesn’t need you to hold his hand. Until he falls and the sting of a scraped knee sets the tears falling and he comes calling for comfort. Five is brave, he will try again. A little more cautiously this time, a little less certain of himself but still determined to do that which can’t be done.

Five finds joy in the simple things. The splash of water from a squirt gun, the squish of a handful of mud, the softness of sand between your toes. Five loves the muck and the mess. He knows that slimy and grimey are just cloaks that cover up hidden treasures.

Jurassic World Toys- Every Kid Is Gonna Want These! 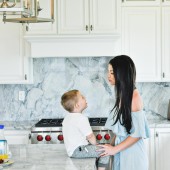 ICE! at the Gaylord National is a Holiday Event You Don’t Want to Miss