How to Grow a Prayer Plant – House Plant Care

5 Best Baby Snowsuit Styles To Keep Them Cozy and Dry

How to stay positive with adult stressors

So my little guy just turned two and we wanted to celebrate the big milestone with something special. We are having his party closer to Thanksgiving when all our family members will be here so they can be there. I’ve been eyeing the Build-a-Bear Workshop store for awhile when we pass by at Potomac Mills, our local mall. I thought it would be a fun idea for his birthday. A few days before the big day we took him into the shop and showed him around, explaining that we would come back on his birthday and he could pick out a toy. He was so excited and talked about it every night, asking when we could go. He told me he wanted the dinosaur, dinosaurs are his thing right now. Dinosaur obsessed!

When we turned the corner and he saw the Build-A-Bear Workshop his eyes lit up and he made a mad dash into the store. He did laps up and down the display aisle of stuffed animals to choose from, touching them and squealing with excitement. There was a moment of indecision between Snoopy (our other current obsession) and the Dinosaur, but in the end the dinosaur won. 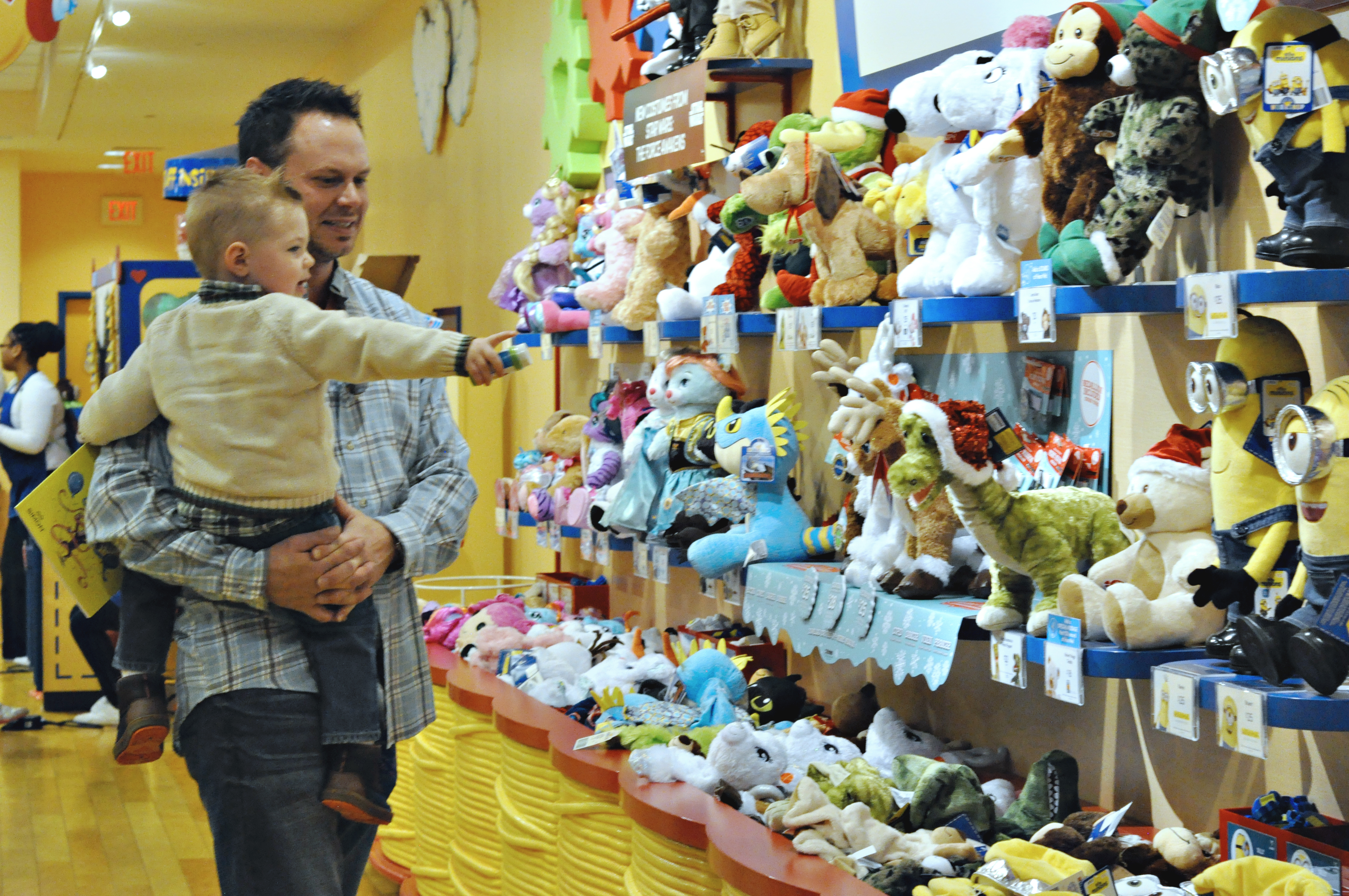 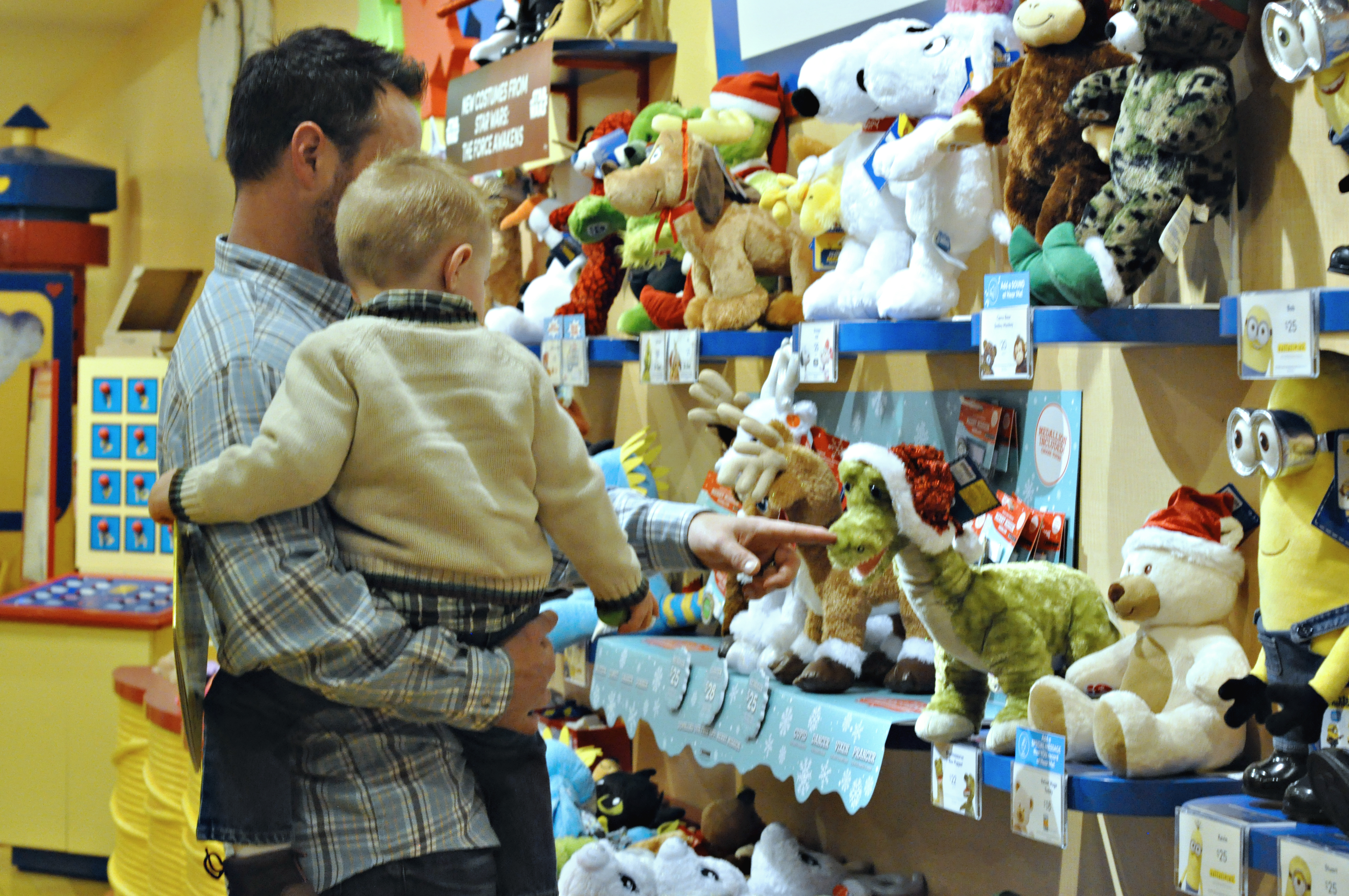 After picking out his dinosaur buddy he got to choose a sound to be placed inside of him. There were several to choose from, the Happy Birthday song, some familiar character expressions, a dinosaur roar, we could even record our own message. It came down to the dinosaur roar or the Snoopy theme song, and this time Snoopy won out. Keeping it fair, I suppose! lol 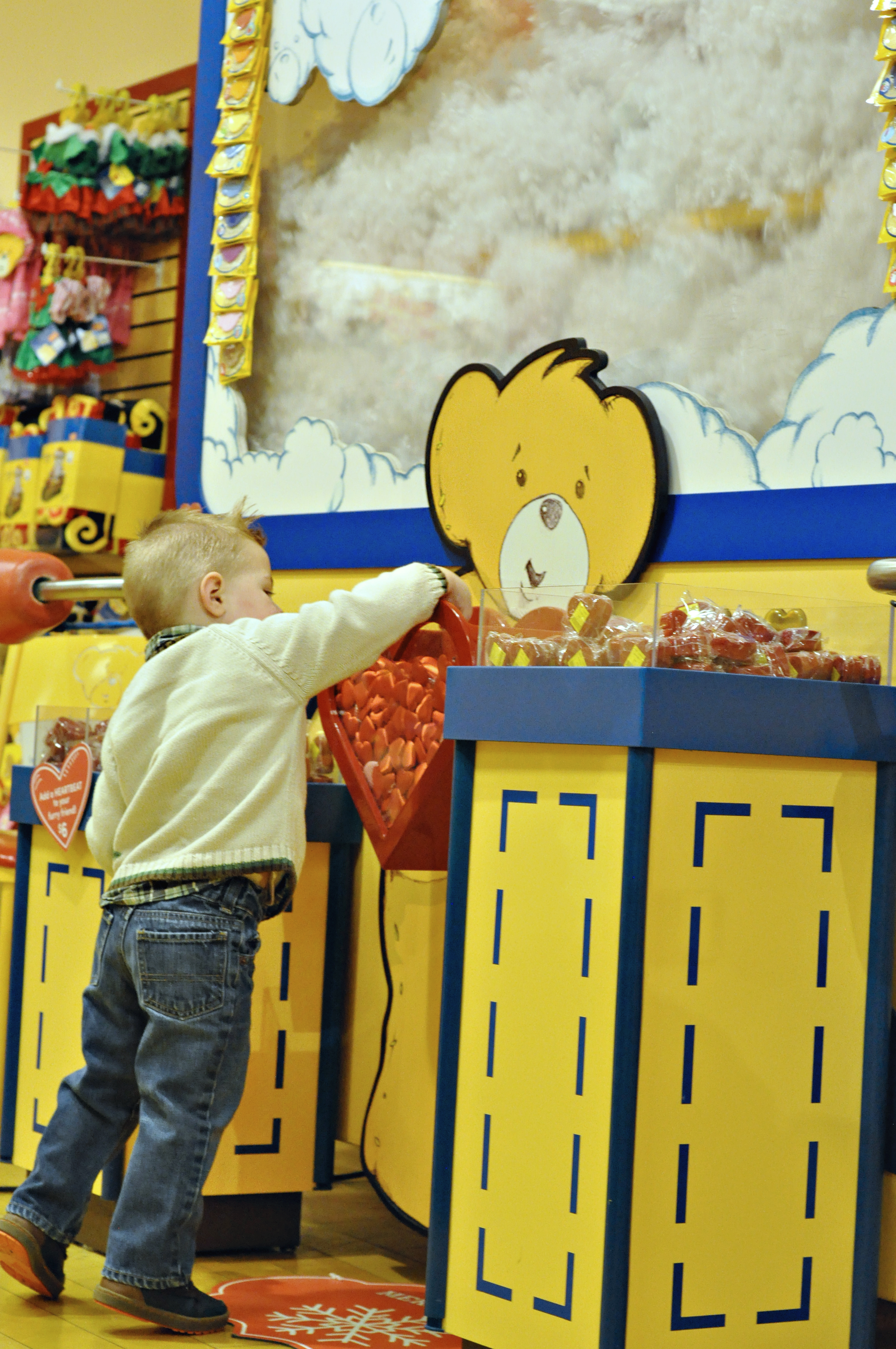 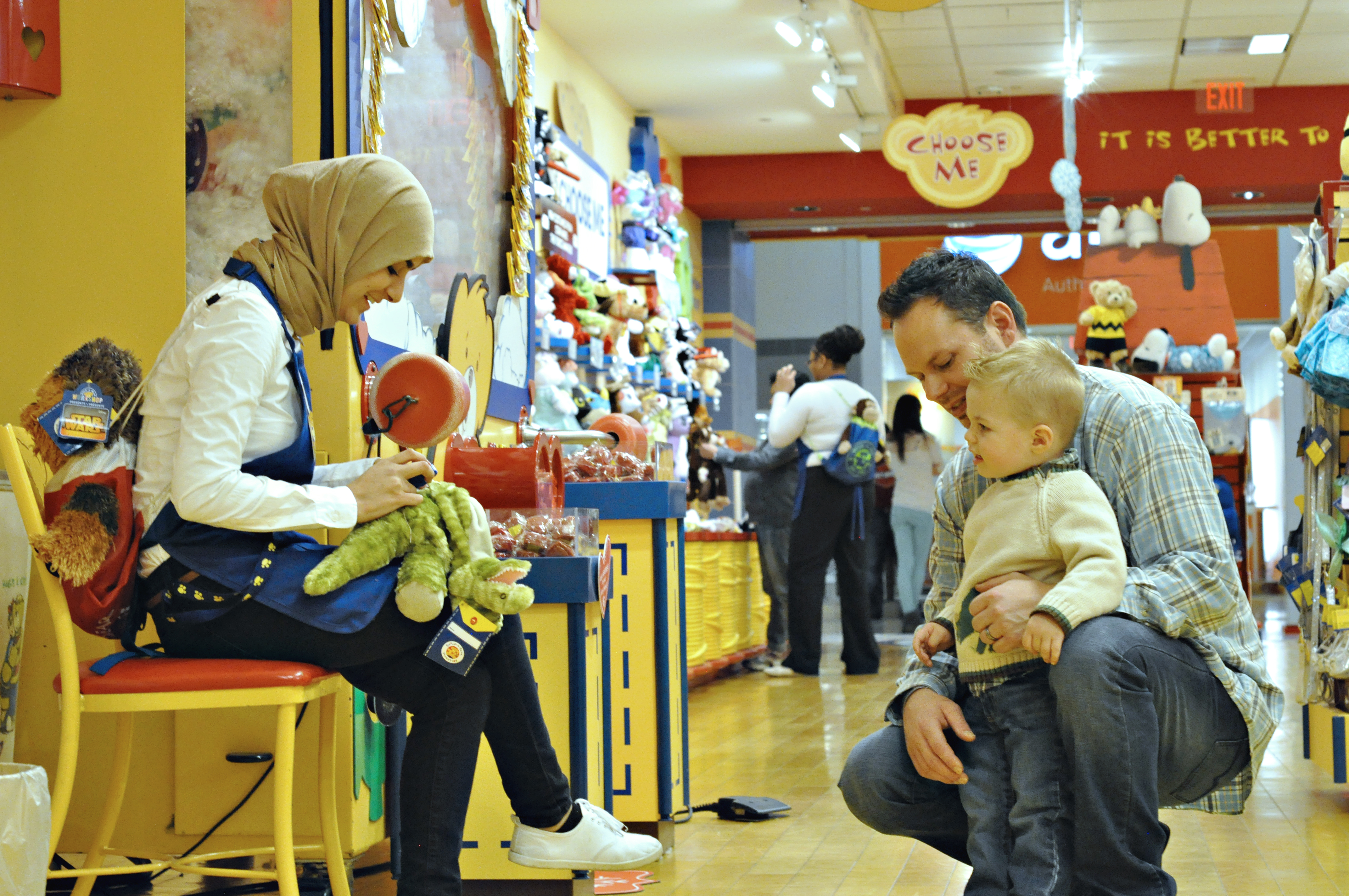 Next he got to assist our friendly Build-A-Bear helper with stuffing his dinosaur. He placed the sound inside, gave his dino a kiss for good luck and love, and pressed the stuffing machine. Now that his dinosaur was stuffed Brady got to help pull the stitches to stitch him up. 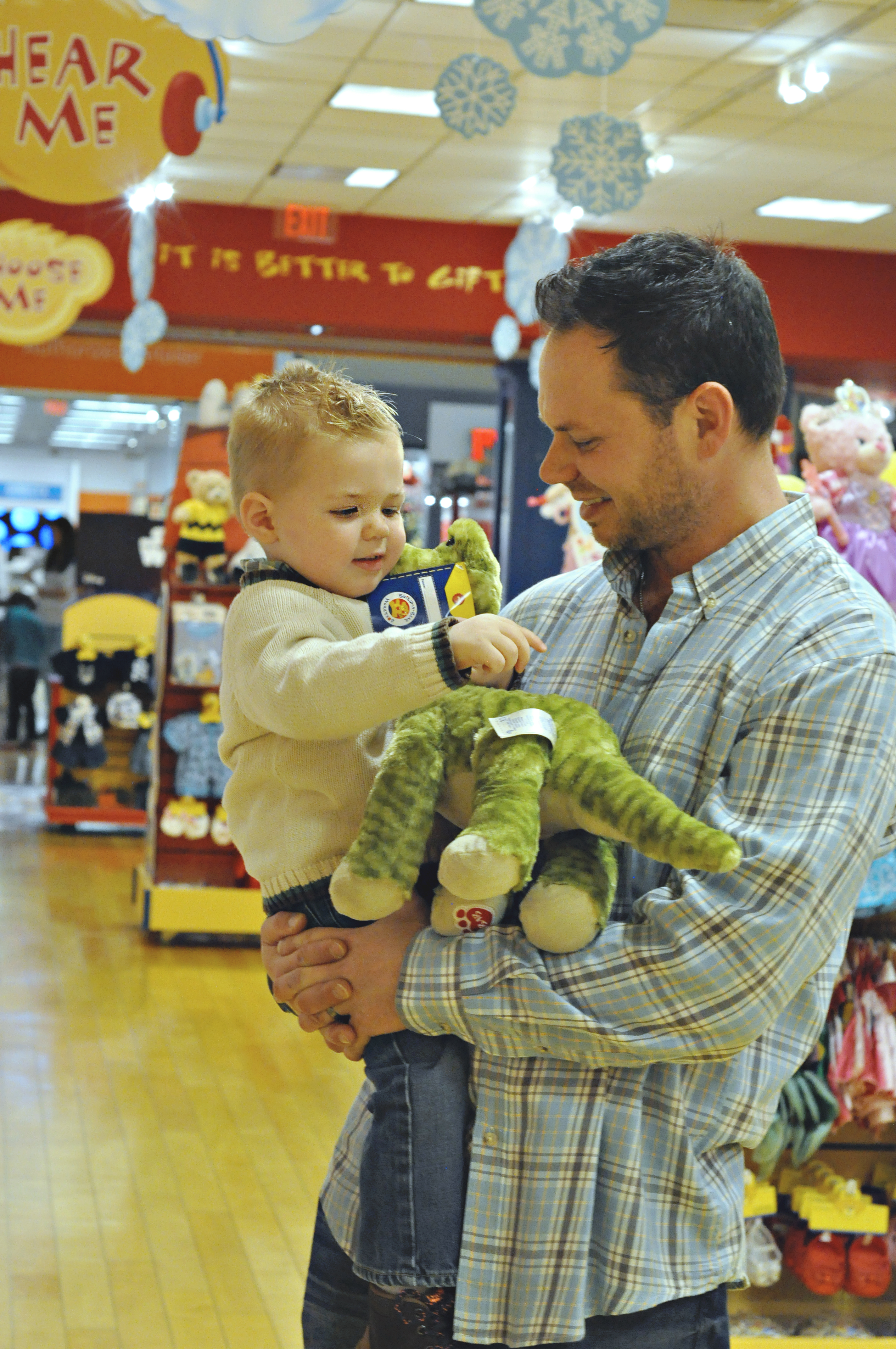 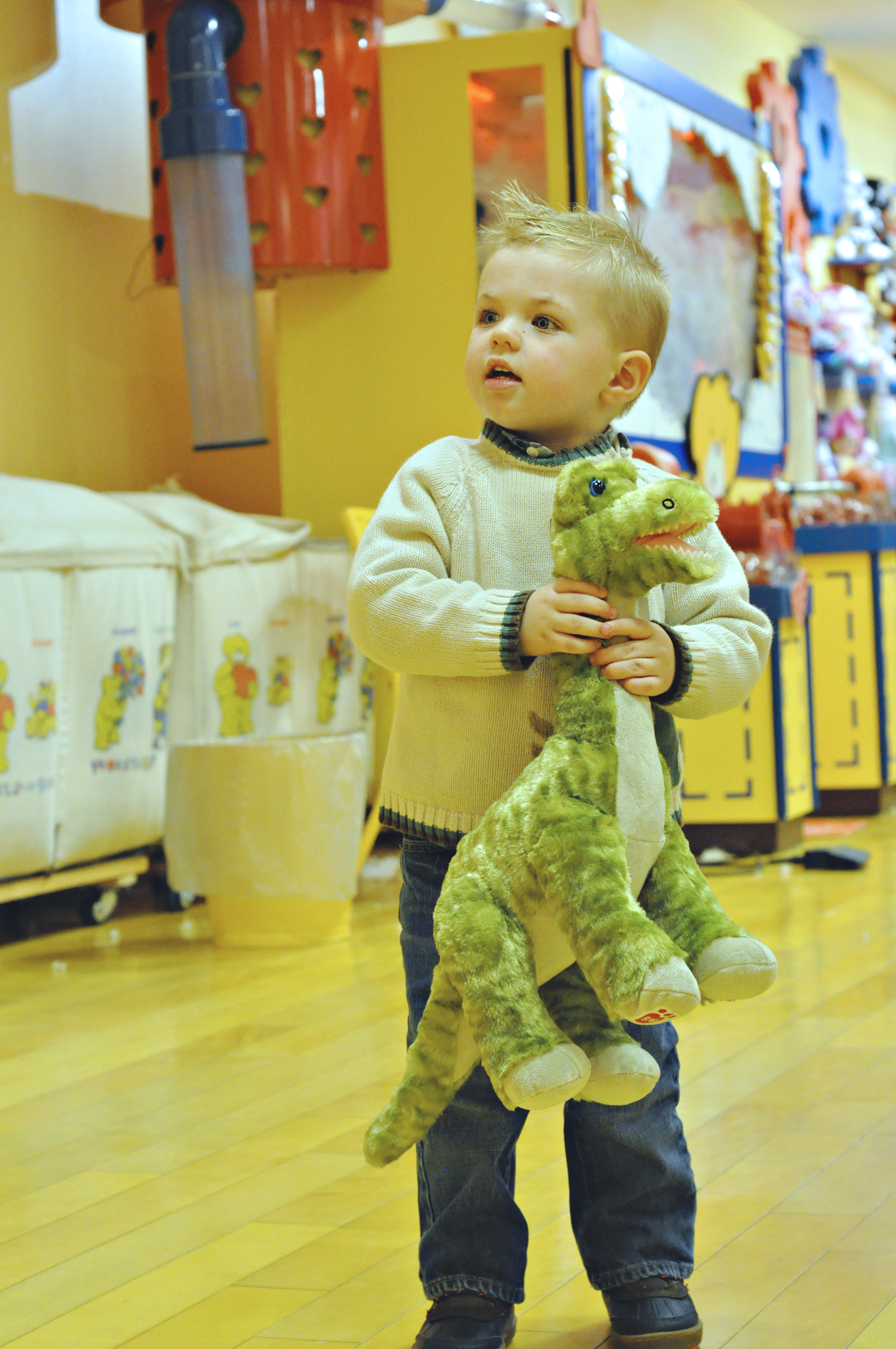 There are tons of fun accessories to choose from for your new friend, everything from hats and clothes to costumes and gear. We may have chosen the only stuffed animal that didn’t really fit the clothing or accessories, so we skipped that part of the experience this time. The Build-A-Bear staff were so awesome, they made Brady a birthday crown and even made one for his dinosaur too! 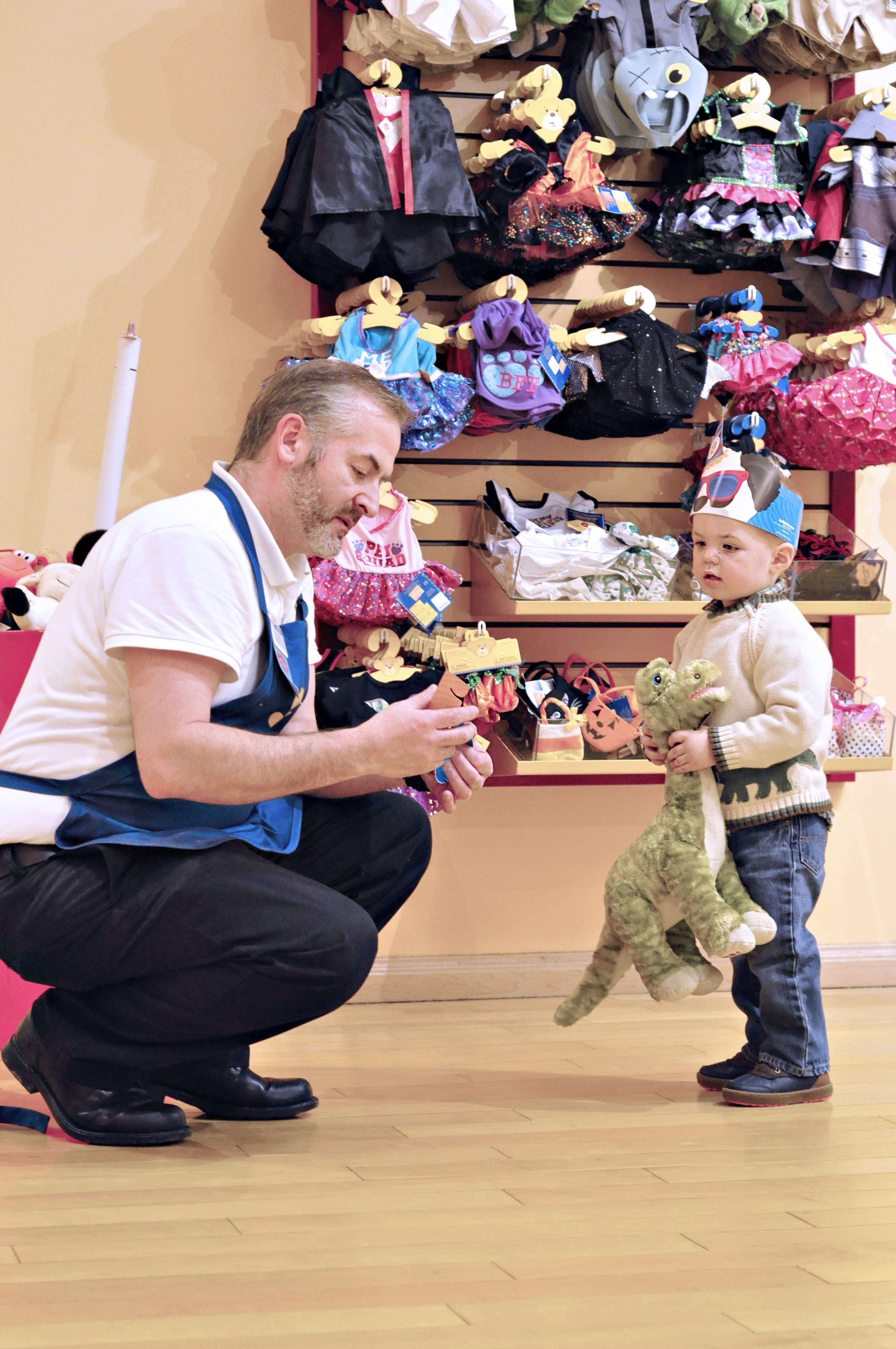 They even made a birth certificate for Brady’s dinosaur. He named him Rocky, after his favorite Paw Patrol character. So now we have a dinosaur, named after a dog that sings the Charlie Brown theme song. I hope you can all keep up 🙂 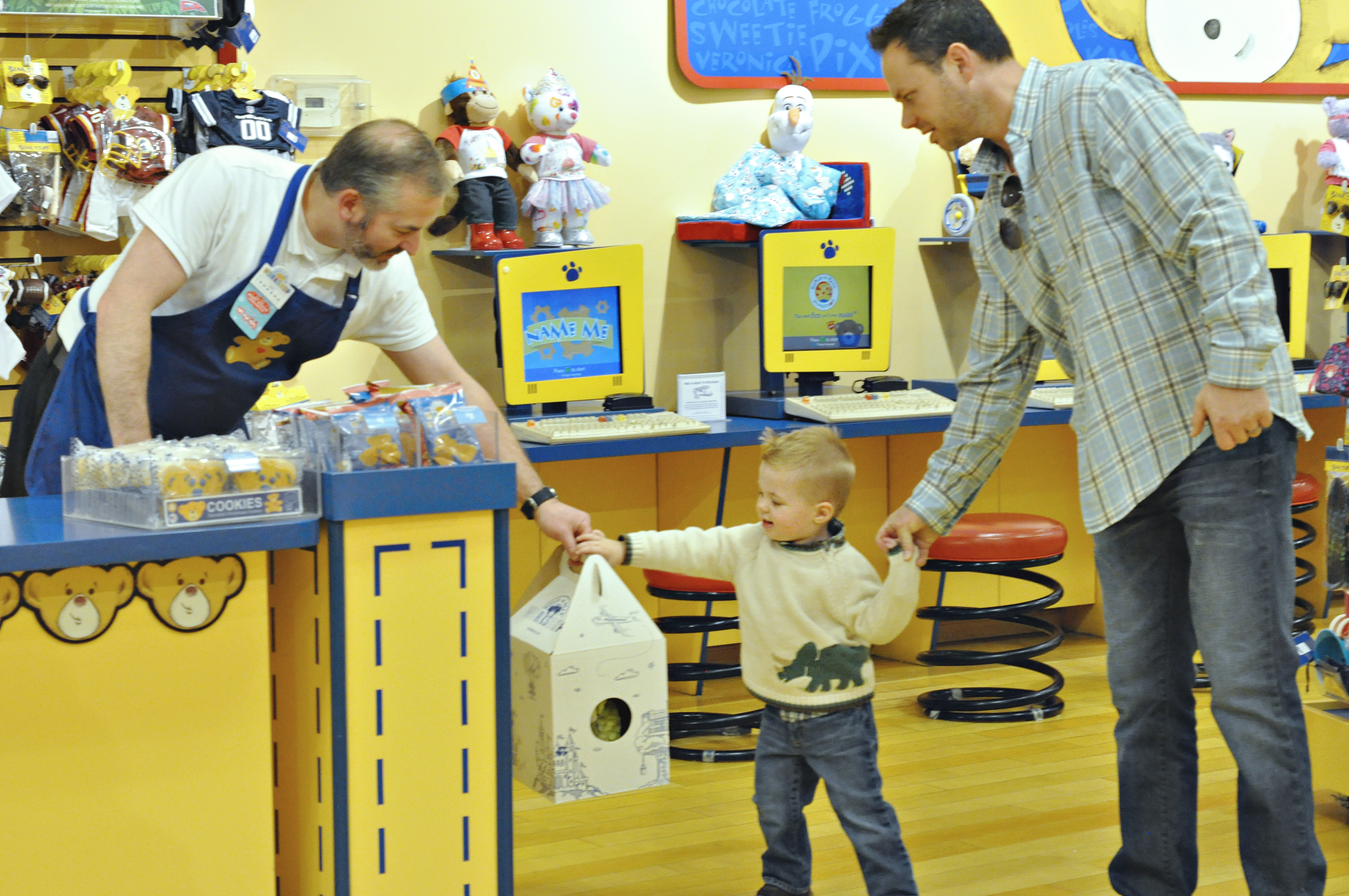 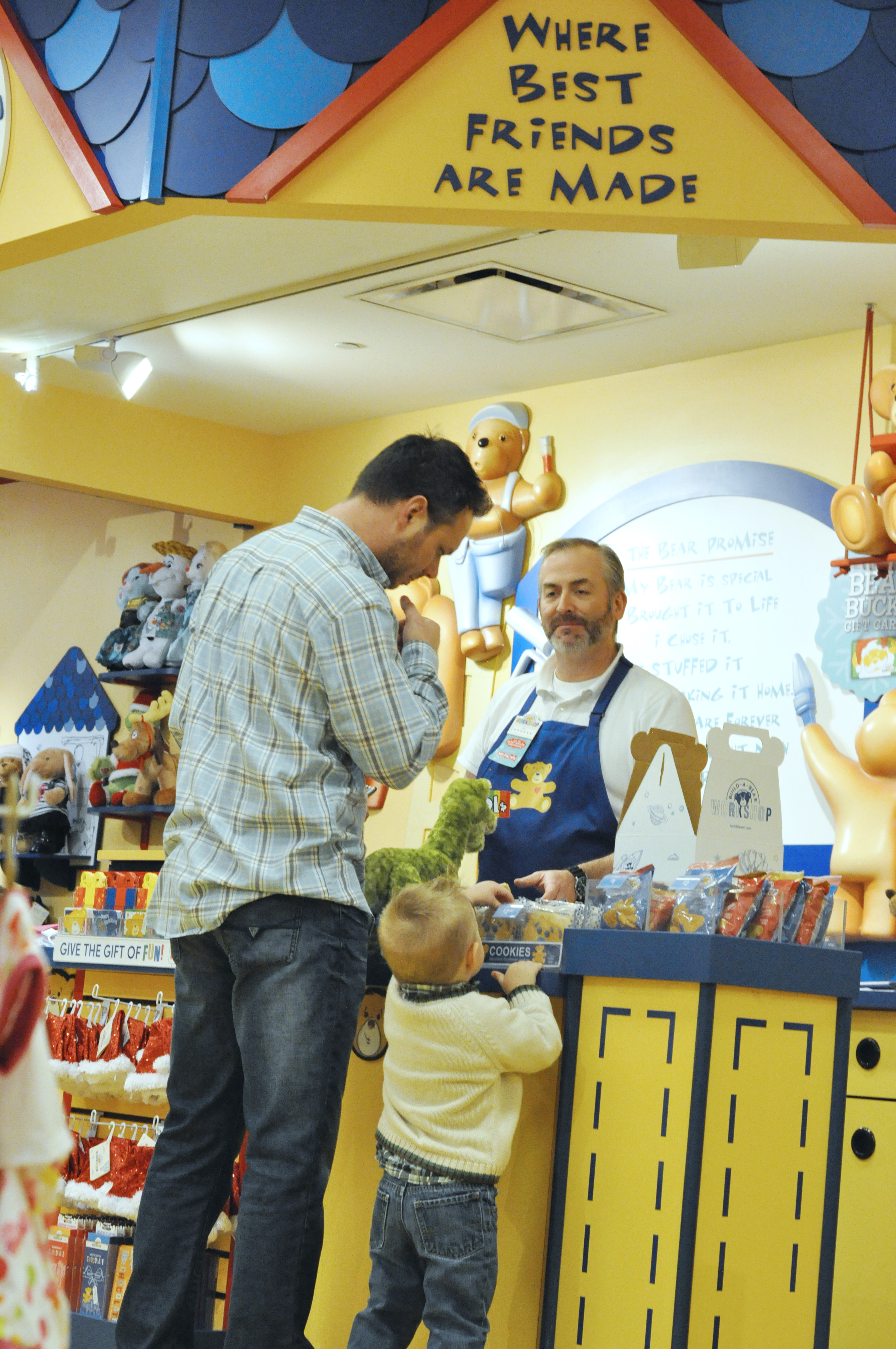 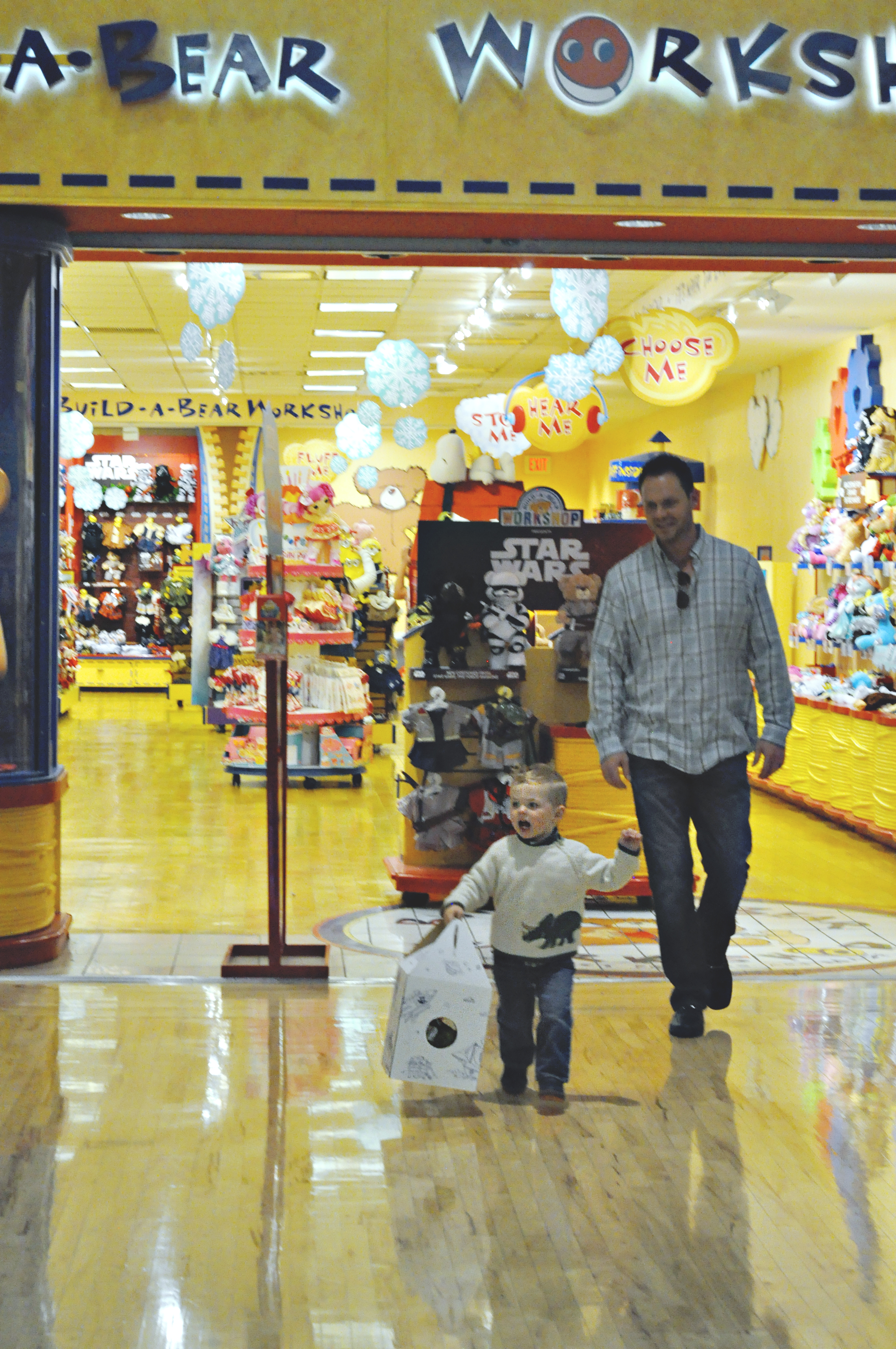 We had so much fun doing the Build-a-Bear thing for his birthday. It was definitely a memorable experience and really marked the day for us, so I’m glad we did something special that we can turn into a yearly birthday tradition until he’s too old for stuffed animals. I can’t even think about that, I can barely deal with him being two. Where does the time go!

A little more helpful info/advice about the Build-A-Bear experience, in case you are curious:

Build-A-Bear offers a list of birthday party packages as well, ranging from $17 to $40 per guest.

Visit their website to find a Build-A-Bear near you

Previous Article At-A-Glance- A Planner + Journal and So Much More!